At 60 miles northwest of Ho Chi Minh City in a small and beautiful city called Tayninh, you will be able to visit the Great Temple or Holy See, the center of an intriguing religion. Cao Dai is a syncretist Vietnamese religious movement that incorporates aspect of Buddhism, Taoism, Confucianism and even Catholicism.

The Cao Dai Temple was begun in 1933 in a unique architectural style that reflects its blended traditions. Most people visit on a day trip from Ho Chi Minh City. The visit of the Temple is included in a pack called "Temples and Tunnels Tour". It's a 10 hours trip from Saigon with a lunch, you will visit also Cu Chi Tunnels and meet local people.

The Great Temple was built between 1933 and 1955. A Cao Dai army was established in 1943 during the Japanese occupation of Indochina. After the war the Cao Dai was an effective force in national politics; it first supported, then opposed, Premier Ngo Dinh Diem. In 1955–56 Diem disbanded the Cao Dai army and forced the sect's pope, Pham Cong Tac, into exile. 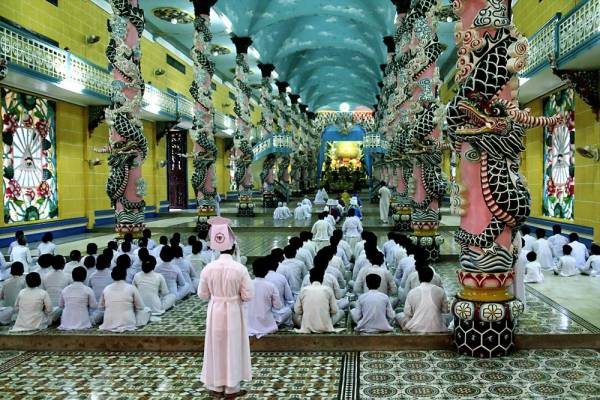 After the communist takeover in 1975, Cao Dai was reportedly repressed by the government. Centers of worship were established in Vietnamese refugee communities abroad, however, and it was legalized in 1985.

Cao Dai followers strive for inner peace and harmony in the world and try to gain religious merit and avoid bad karma. Cao Dai encourages obedience to the three duties (those between king and citizen, father and child, husband and wife) and five virtues (humanity, obligation, civility, knowledge, reliability) of Confucianism.

The exterior and interior of the Cao Dai Temple are both extravagantly decorated, incorporating symbols, abstract designs and images of saints. The high ceiling is painted sky-blue with fluffy clouds and the floor tiles have busy patterns. The dragon-encrusted columns that run the length of the nave number 28, representing the 28 manifestations of the Buddha. Seven-headed cobras represent the seven human emotions.

The three principal colors of Cao Dai are yellow (for Buddhism), blue (for Taoism), and red (for Christianity), and these appear in worshippers' robes as well as the temple. The most important symbol is the Divine Eye, representing God, which also appears in followers' homes. It is a left eye, because God is Yang, and Yang is the left side. It has a ying-yang symbol in the pupil.

There are four ceremonies with chanting each day: 6:00 am, noon, 6:00 pm, and midnight. An orchestra of 10 musicians and a choir of 20 youths lead the service in prayer and hymns. The hymns sound western, but the accompanying music is traditional Vietnamese.

Visitors are warmly welcomed at the Cao Dai Temple and may watch ceremonies and take photos from the galleries. Visitors are only asked to wear trousers or skirts covering the knee, remove their shoes before entering, and remain as quiet as possible during ceremonies. The noon ceremony always has the largest audience, since most visitors are day trippers from Ho Chi Minh City.

How to find Cao Dai Temple in Tayninh

Located in Eastern of the South, Tay Ninh shares border with Cambodia on the north with 240km boundary, Binh Duong and Binh Phuoc provinces on the east, Ho Chi Minh City (3h/4h distance by car) and Long An Province on the south.

On the north, there is Ba Den Mountain, 986m high. The province has Vam Co Dong and Sai Gon rivers and Dau Tieng Lake. Cu Chi Tunnels are at just 2 hours.