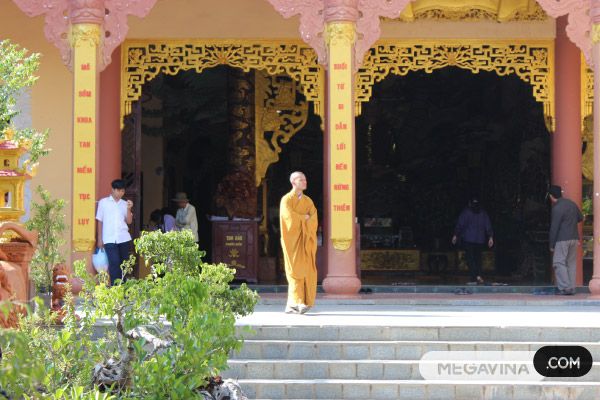 Most famous for their 79 feet-high golden Buddha statue sat in the lotus position (The Lotus Position is a cross-legged sitting posture originating in meditative practices of ancient India, in which the feet are placed on the opposing thighs), Van Hanh's property is a great place to walk around during the day with its surrounding green gardens and lush palm trees. 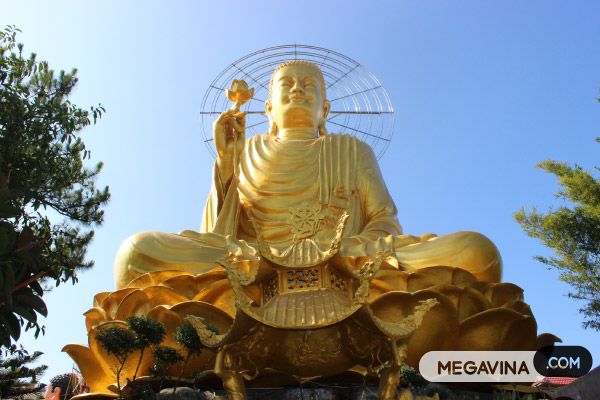 What is the meaning of the lotus flower in Buddhism?

No entrance fee! It seems strange to precise it but more and more tourist sightseings are not free anymore...

There isn't much to do here except admire the huge golden Buddha statue and snap a few photos. In the first temple, you will be surprised to see 2 reclining buddhas and many wooden statues all around.

On the main temple, you will discover the praying area, nicely decorated with a beautiful meditating buddha statue, in this pose, the Buddha is depicted with both hands in the lap, face up, and the legs are crossed, in a Lotus pose.

Did you know that many of the largest Buddha Statues, for example in Japan, such as the Great Kamakura Buddha Statue at Kotokuin Temple, and large statues in Korea are in the Meditation Pose? This pose is also known as the Amithabha Buddha, which means “Boundless Light.”

Other interesting Buddha statues in Vietnam:

- Massive Buddha statue at Vinh Trang Pagoda in My tho city

- The statue of more than 33 m high on the Forbidden Mountain in An Hao Commune, Tinh Bien District, An Giang Province

Thien Vien Van Hanh is located at 39 Phù Đổng Thiên Vương in Dalat city. Xuan Huong Lake or the Dalat market are at just 7 minutes away. The golden Buddha statue can be seen from a long distance because it's quite high, 79 feet-high. It's also located on the way to go to the Love Valley.